Being born and raised in the country has its pros and cons. I would not trade my childhood or the way I was raised for no amount of bacon. The only real negatives were the lack of culture and being exposed to more worldly things, especially ethnic foods. But fortunately for me I chose several career paths that exposed me to things I would have never experienced in my small town. I’m Pennsylvania Dutch, raised on meat and potatoes and growing a garden was an annual event all my relatives took part in. My great aunt and her husband who were dairy farmers gave me an appreciation of fresh meat and of course milk. The heifers were prize winning and fed natural things with great living conditions not as common today by those farms that do mass production. My aunt’s farm, Milky Dell was the second largest dairy farm in PA many many years ago. I don’t recall the milk as much as I do the fresh delicious beef we got every few months. They have long passed but as I’ve gotten older my respect for the American farmer has certainly increased. Especially those that do it right and have the best interest of their livestock as well as their customers that they sell to in mind.

Recently I was contacted by Marina of Circle B Ranch, a family owned and operated Berkshire/Kurabota Pork Hog farm located in the lush and rolling hills of the Ozark Mountains asking if I would test some of their products. How could I resist pork, especially smoked bacon? A few days after I received a care package with Pork Chops, Ham, Smoked Bacon, Marina’s Tomato Sauce, Mariana’s Meatballs and Marina’s Cranberry Chutney. I was never asked or paid to create a recipe(s) or write anything about Circle B Ranch and their products. Or at the time did I have intentions to write this. I was going to make some dishes and then inform them what I thought of their products. 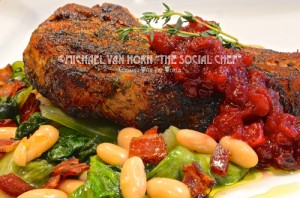 Being Circle B Ranch were kind enough to trust my opinion I thought it would be nice to photograph some of the dishes I created just for them to have. While I personally thought the image of the Circle B Ranch Center Cut Pork Chop with Marina’s Cranberry Chutney turned out great I was more pleasantly surprised at the taste and the texture. Perhaps my favorite part of the pork chop was it was thick cut, just the way I like them and perfect for stuffing, about 1 3/4 inch thick. But I wanted to taste more of the pork so I chose a different recipe creation. The Circle B Ranch center pork chop was extremely tender and moist. It is important with any pork chop to create a sear to lock in the juices and to allow it to rest prior to eating but that doesn’t have anything to do with the fresh taste I experienced. Marina’s Cranberry Chutney was a perfect compliment to the pork chop. To be very honest I’ve had a variety of chutney before but never cranberry chutney. It was a last minute decision to add it on top of the pork chop…and proved to be an added benefit to the taste of the pork chop, it was simply delicious. With such great flavor curiosity peaked my mind so I then dove into their website that lead to numerous conversations with Marina about Circle B Ranch because I found humane farming to be impressive as well as important.

Marina and John, the owners of Circle B Ranch relocated to Missouri in 2009. They had owned a small hobby farm where John raised turkeys, ducks 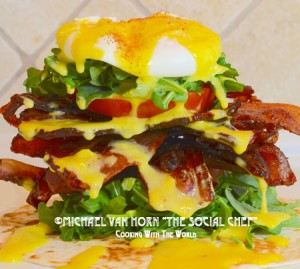 and chickens for their own consumption. They were ahead of their time since they fed them feed that did not contain unnecessary hormones or antibiotics, exactly how my great aunt did. This practice and belief has been continued on their farm in Seymour, MO. John and Marina are passionate about food and what they eat and it is obvious as Marina has created her own line of  delicious products that only someone who really loves food would take on such an endeavor. John and Marina firmly believe that an animal’s welfare is very important to the taste and the appearance of the meat, which is why Circle B Ranch make such a significant effort in the natural and humane raising and handling of their Heritage hogs. I am still wondering how they found The Social Chef to test their pork and other products, but nonetheless it was a privilege to them and I am looking forward to that hickory smoked ham and Marina’s Italian Style Meatballs. As of now I have only had the smoked bacon, pork chops and Mariana’s Cranberry Chutney all of which are excellent. I made one of my very favorite dishes with escarole that I often use pancetta in but used Circle B Ranch smoke bacon instead. The smokey bacon flavor really worked perfectly with the escarole and beans. The smoked bacon was so good I cooked the entire remaining package the next day and added it to my favorite breakfast dish and created Circle B Ranch Big Boy Smoked Bacon Eggs Benedict. This is how you serve a great smoked bacon…you go big or you go home.

A Dining Experience to Remember; A Boston French Bistro
The Social Chef and His Journey