Some people just have a way to make you notice them, like Nagi did, the creator of the RecipeTin app and resident of Australia who came to my 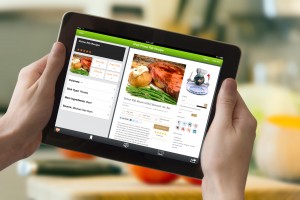 RecipeTin App, Finally, an app that makes it easy to get all  your recipes in the one place.
Capture documents, photos and webpages                  or create your own.

Facebook page with only 20-40 followers. What caught my attention was not her profile image, not what her page was about but her introduction.  Kind, courteous and obviously someone who has great people skills. I immediately welcomed her and began to follow RecipeTin App on Facebook. Then became increasing interested in what she and RecipeTin app were all about. What I really wanted to know was how this RecipeTin app works.

Through some Facebook likes, comments and shares I became increasingly more curious what the RecipeTin app was? So I finally sent her a message to tell me about it. Yes I did go to her site but I’m more interested in getting it straight from the source. She immediately was more than anxious someone took notice as to what she had and never was she shoving it down my throat. I guess when someone has something they know is good and benefits others, Nadi realized sooner or later it will get noticed.

So as I learned about her Recipetin app she was kind enough to give me a download link. We exchanged some emails and I asked her if I could feature her RecipeTin app. She was not in any hurry but more anxious for me to actually use her app and give my feedback. A few days later when I had found the time to test it, I insisted to feature her creative invention that will benefit every recipe collector in the world. I think she was a bit shocked I wasn’t looking for any money, just to share with other food lovers something they would all use and benefit from. So then I requested some information to know her story and how this all came to fruition, and so the story goes.

At some point and time in our life we all go though some form of transformation. For most they may happen gradually and for others they hit us fast and hit us hard. They may vary as to what they may impose upon us, it may be a force of a new job, perhaps a new way of eating for health reasons, maybe a spiritual awakening, the list is endless. For Nagi, a resident of Australia it was living the status quo and so the birth of RecipeTin app was born.

Around the same time she had the idea to create the app. Nagi tells me, I had a midlife crisis…an “epiphany”……….That working 15-17 hour days behind a desk job and slogging her way up the corporate ladder was not “living life”. Fed up with a job working endless hours with little hope for growth, she took a risk, a huge risk, in which many want to take but only a few ever have the courage to embark upon. And for that reason and being a start up business struggles immensely getting exposure without a huge marketing budget and or working capital, I wanted to try and help her. I hope anyone who reads this blog will check the RecipeTin app out and buy it, and if not share her website with others, or share her Facebook page. An act of kindness will pay you back 10-fold and it’s always a nice thing to do to just help someone who is trying so hard.

Nagi has so graciously shared what many of us recipe collectors go through to find recipes we love and want to make but cannot find. That is only one of many benefits and features of the RecipeTin App.

Nagi says, I come from a foodie family. When we aren’t cooking or eating food, we are either planning our next meal or arguing about food. At a family dinner one night, we all realized that we share a common problem: we’ve collected recipes from everywhere, but have nowhere to store and organize them in one place. Printouts from food blogs, pages torn from magazines, pages flagged in cookbooks, recipes we typed up ourselves, in emails….We searched and searched, but couldn’t find an app where you could add recipes without typing in all the recipes. AND our favorite recipes are on food blogs, so all those fancy sounding apps that do “auto import” of recipes did not work for most blogs, they only work for major recipes sites like foodnetwork.com. So we designed an app that made it easy to get recipes into an app no matter where you find it.

Here are some of the features and benefits of the RecipeTin app.

I love the spirit of Nagi and I really love that she took a risk, one that I really hope and pray creates a miracle for her while benefitting all of us recipe collectors. Please share her Website, Facebook Page and give her some support. Here are additional social media site for RecipeTin App. Pinterest, Instagram, Twitter, Google+, Tumbler.

How to Enter Your Recipe and Links to Your Social Media Pages
A Dining Experience to Remember; A Boston French Bistro