Every country has certain rituals that have gone on for centuries. In most European and Latin American countries, one of the most famous and respected rituals is something referred to as name day. This is when people celebrate the day of the year that correlates with one’s given name. The tradition began with the Christian calendar of saints. In most countries however, there is no precise correlation to Christianity. It continues to be very popular in the Catholic and Orthodox parts of Europe and is certainly very popular in Greece. According to the Greek Orthodox tradition, nearly every day of the year is dedicated to a Christian saint or Martyr. When someone is named after one of those saints, that day becomes their “name day” and, traditionally, is celebrated.

The way it is celebrated in Greece and I assume in many other countries that celebrate this ancient tradition is most common to one’s birthday. It’s really a big deal here in Greece. To the people of the Greek Orthodox faith, name days are an anticipated event every year even more so than a birthday. The family and friends of a person who is celebrating their name day often buys a gift and prepares a special meal. Relatives come to gather and honor them for the day. Children sometimes will take candy or something to school and offer it his or her classmates as well as their teachers.

Where I am staying in Athens is only a stone throw away from a beautiful Greek Orthodox Church, St George. Today happens to be the name day of St. George and so the church is doing a huge celebration. Church bells will ring throughout the day and the surrounding area will be filled with people following the parade with the Holy image of the Saint. The celebration kicked off at 9pm last evening with hundreds of people holding candles and singing as they parade around the 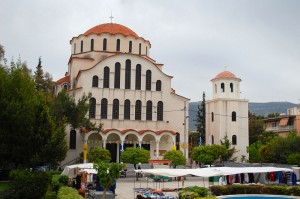 streets to honor the church and it’s name day. People of Greek Orthodox faith are coming and going throughout the day to pay their respect to the church.

Customs and traditions in Greece are an essential part of the Greek culture. Most of the traditions and festivals still celebrated today are religious. The Greeks tend to be rather superstitious (so I’m told) but believe a deeply in their religion. Traditions as well superstitions vary from region to region and town to town.

However the name day in Greece is celebrated not only within the country but celebrated by Greeks around the world. It is similar to how Christmas was in the states when I was a child but since government has gotten involved it seems we are slowly losing some of the Christian holidays that to me made the United States what it was. It certainly is one of the things I most admire and respect about Greece since visiting here are the old traditions that seem to hold their place and value to the people and how their faith still holds a very valuable place amongst the people.

The attached image is of St George Greek Orthodox Church and the video is from when I was here last year and the church bells rang for Christmas celebration.