Journey to Glyfada for Souvlaki

I woke up to an invitation to see another part of Greece called, Glyfada. It’s about 90-minutes one way and if you hit the subway and 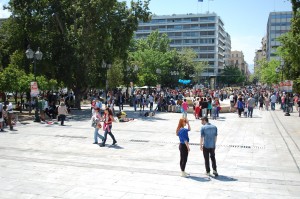 Near the Greek Parliament Building in Syntagma

train just right you can probably do it in an hour. So off I went for a journey to Glyfada for Souvlaki.

After the first leg of our journey the subway came to a stop and we ventured up the escalator where we came upon the Greek Parliament building and where the changing of the guard was just under way. I quickly pulled out my camera and took a few shots

then reached into my pocket and pulled out my 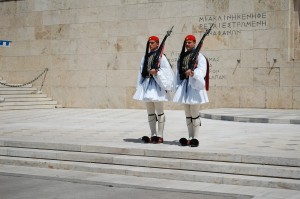 Watch th Changing of the Guard at the Greek Parliament
http://www.youtube.com/watch?v=MiAJhaXO4sY

phone and began to videotape it. The uniforms were very different than what I have become accustomed to in the states with our military. They seemed more like a costume than a military uniform. Nonetheless the music and the procedure were very alluring so I briefly stood in amazement. After a series of photos and a few video takes, off we went to catch the train to Glyfada. 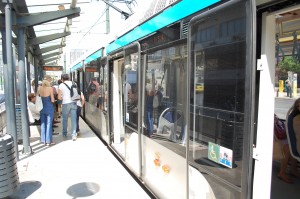 As we approached the place to pick up the train it became obvious by the transportation clock that we missed our connection and had to wait 20-minutes. So as you might guess this was going to be the 90-minute trip to Glyfada.

Once on the train or what we might call a trolley in the states, it transported us through the top of Acropolis and as we continued through various towns in Athens. I personally love to see the diverse areas in a country and how people live. I guess you can say I am your typical tourist. 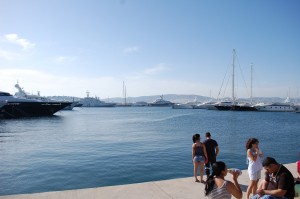 As usual I became anxious to get to my destination. Perhaps that is because I was overly anxious to have souvlaki, which I was told is fantastic in the area we were heading to. As we became closer to our final destination out of nowhere appeared the Aegean Sea. It was absolutely breathtaking. The sky 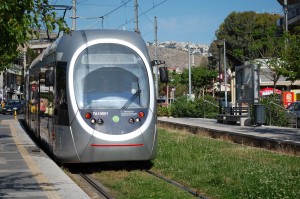 was as blue as could be on this day and perfectly clear to gaze at the mountains that surrounded the water. As we reached our peak the views of the beach emerged. The best description I’m able to give without actually being there is it looked like something out of a postcard. The beach was filled with people playing volleyball and other beach games and many simply enjoying the sun. Soon a variety of marinas came into view with boats and yachts of every magnitude. 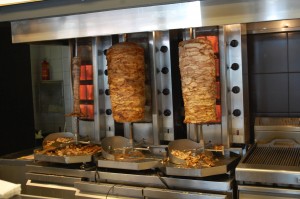 Within about 15-mintues we finally arrived at our destination and as one could only imagine I was hungry and ready to taste for the first time, souvlaki. We skated off the train, crossed the street and right before us was BOBO Souvlaki House Restaurant. It wasn’t a fancy place but the immediate views of enormous state-of-the-art gyro machines stacked with meat, I knew I was about to be in food lovers heaven.

As I walked to the counter without hesitation I grabbed my Nikon and blasted a few shots. The one chef just looked at me and smiled as I slid the 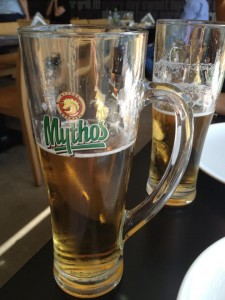 camera away from my face with a smile my only reply was…I’m a tourist. I have seem gyro machines a few times in the states but quite often here in Greece since my arrival, but none as large and as fancy as these.

We were directed to a table and being rather parched I was told I had to try a Greek beer. I’m not much of a beer drinker but a cold one now and then always hits the spot. I have to 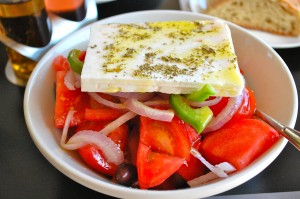 be honest; I was very parched which means I had more than one. We started off with the traditional Greek salad that I am quickly realizing the Greeks eat with almost every meal. Then the souvlaki was ordered and I was salivating, I could hardly wait. When it arrived in front of me I pulled out my Nikon once again to capture the work of art. This is one of the most famous dishes in Greece or at 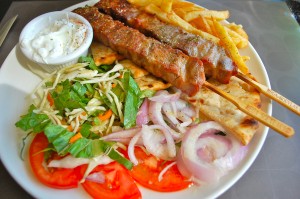 least to my understanding it is. It was very delicious and perhaps it’s because it was served with my favorite tyrosalata sauce.

After a very enjoyable lunch we headed to the Marina Palaio Faliro, Floisvos 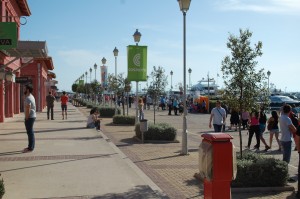 for a little sightseeing and then finally headed home. It was a super day and and my souvlaki was well worth the long journey. But then again…I am a food lover!!