Exploring the Ancient City of Monastiraki

Yesterday started rather on the cool side then the sky turned gray and soon after a little rain started to fall. It looked as if the day 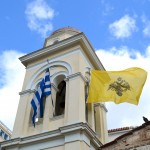 was not going to be very good but by the time I took a shower the sky was blue as can be. The original plan was to go into the ancient city of Monastiraki but once the rain started I was set on just a relaxing day on the sofa doing some work. But once the sun was out I was not going to waste the day away being a couch potato. 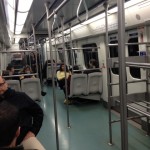 The language barrier is far more difficult than Italian or other foreign languages or at least for me it is. I set out on foot with camera in hand and headed for the subway. Which I have to say is the cleanest I’ve seen. New 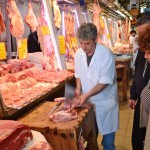 York City could take a lesson here for sure. Never in my life have I seen people cleaning railings or anything else for that matter on the subway.

Once on the subway I got off one station earlier than I was suppose to and for some stupid reason I went up the escalator then crossed over and back down to catch it going the other direction, which isn’t what I needed to do. Nonetheless, I was on the subway for at least 45-minutes longer than I should have been. 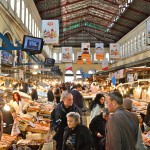 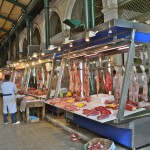 lunch. I started walking with really no direction and stumbled upon a market which I am not sure the name, all I know is this place had to be equal to at least 3-football fields. And mind you, when I say football…I mean American football. Just thought I would clarify that.

The market had a variety of meats; goat, lamb, pork and chicken cut into every kind of way you could imagine. Very common in Europe to see the entire animal skinned and hanging and this market was no exception. I was very impressed at the butchers I encountered. Honestly I am not sure how many there were but if there was one butcher then there was a 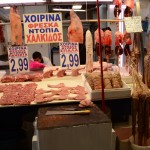 hundred. I noticed some people dressed a bit on the professional side and 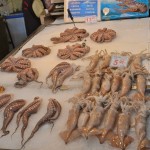 while I cannot confirm who they were, my guess is they were restaurant owners inspecting the meat prior to buying it. As I walked down the isle both sides were lined with venders selling cheese, fresh yogurt and olives. There were spices of every kind both fresh and dried. It was truly a food lover’s paradise.

When I finally got to the very end there was another corridor that lead to yet another huge area lined with all kinds of seafood. I have never in my life seen anything like this. And being a huge seafood lover I was in heaven, however, there was one particular seafood that I wanted to 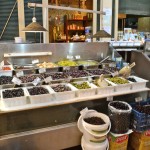 back up a huge truck and haul away…octopus. It is very very difficult in the 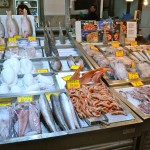 USA to find fresh octopus and what you do find is usually frozen. Many places no longer carry it because the method in which they have to kill the octopus many animal activist have displayed displeasure and so places like Whole Foods no longer carry Octopus.

I really could have stayed there for another hour but my stomach was craving to have it filled. I finally reached an area by an ancient church with Acropolis sitting above and found a nice little restaurant with outside tables so I settled on this place to take in the beautiful sun and do some serious people watching. To be very honest the area where meat was 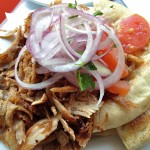 circulating for gyros was the selling point. It could have been in the 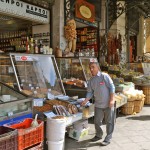 subway terminal, I was sold. I tasted a variety of Greek dishes and our waiter was more than willing to show me into the kitchen and explaining the variety of dishes they were preparing and the ingredients used. I was overtaken by his generous hospitality. It was a perfect lunch on a picturesque setting in a beautiful little town.