Home » Blog » In Search of the Best Philly Cheesesteak

In Search of the Best Philly Cheesesteak 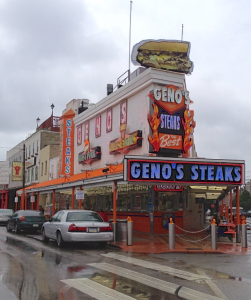 Who makes the best Philly cheesesteak? Well, that is a great question and the truth is, The Social Chef! I doubt you believe that and why should you, the two most famous places in the world are located litterally a few steps across the street from one another on the corner of 9th Street and Passyunk Ave in South Philadelphia. People from all over the world when in Philly have come to experience Pat’s and Geno’s to do their own taste test for the best Philly cheesesteak and so have I, many times over. People on there way to the airport have a limo idle why they run to the window to order a Philly cheesesteak. Celebrities have come to get a taste while getting behind the grill for a photo shoot, PR at it’s finest. Presidents have come to get a Philly fix and Rocky Balboa filmed a scene from 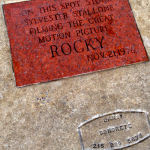 Rocky at Pat’s Steaks. Without a doubt there is something special about Pat’s and Geno’s that only a visit in person could make you understand. It exemplifies this blue color community of this great city.

So with camera in hand I venterured back to my old stomping grounds of Center City Philadelphia where I threw back my fair share of brewskies and Philly cheesesteaks while attending the Art Insititute of Philadelphia. Every time I drive past Boat House Row on my way into Center City I get a warm and fuzzy feeling of being home. Many weekends I use to spend there watching rowing races. I have been to every major city in the United States and while I love NYC for all it’s diversity, there is no city I love more than the city of brotherly love and sisterly affection. The culture and its history are enough to make anyone feel so prideful of being an American. 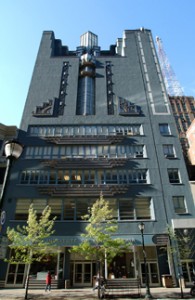 Pats The King of Steaks

During my short few years in college living at 2101 Chestnut Street, I had ventured to some of the most famous places in America. My friend Drew and I would throw frisby at the bottom of the Philadelphia Art Museum steps and on numerous occasions I ran up those steps pretending to be Rocky. I walked past the statue countless times that I most love in Philadelphia, The Thinker, which ironically always made me stop and” think” what will I make of my life. Some days during school I would grab a kaulbasi from a street vender and sit by the Liberty Bell, Independence Hall or my favorite place the Declaration House on Market Street. Always took me back in time to where our forefathers carved out the Declaration of Independence. On more times than I can count I spent lunch breaks or evenings sitting in Rittenhouse Square with my two best friends, LeAnne and Heidi just doing nothing and some people watching. Of course there were the afternoons, mid afernoons, dinner time, early evenings and late nights spent at Oscars and the Irish Pub doing what college kids do best, learn how to drink. Did I mention weekends too?

There was one thing I did better than most and still holding my own, is eating a Philadelphia cheesesteak. I’d say seldom a week went bye that I didn’t have a Philly cheesesteak. Now I didn’t always venture over to Pat’s or Geno’s but hands down, they are the best.

So when I came back to Philly for the first time in years, I found the route to Pat’s and Geno’s with my eyes closed. These two world famous landmarks in Philly are within a hop, skip and a jump from one another. To say they are rivals is an understatement. But now that I am a food blogger I felt it might be a good time to go back and do a real taste test and see which one I really think is best. 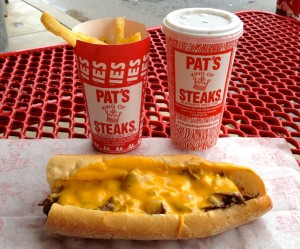 What was the verdict? Let me first explain the major difference. The number 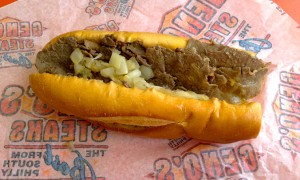 one difference to me was the way the meat was prepared. They both use high quality rib-eye. But Pat’s chops their steak into small pieces and Geno’s is left alone in larger pieces. Geno’s puts their Cheese Whiz on the bun and Pat’s smothers it on top. Other than that they are pretty much the same. So which Philly cheesesteak do I prefer? I love them both but if I was told I could only have one, which seldom happens, I would choose Pat’s, AKA “The King of Steaks“. Why? I think the meat chopped up just has a better texture to it and a bit more flavorful. That being said, I was just happy to be in my favorite city in the Streets of Philadelphia where I shared some of my greatest years of my life with not a care in the world listening to The Boss and going to school for one of my passions, photography.

For my version of the Philly Cheese steak go here!

Have You Ever Been Involved in an Internet Scam, NinjaWeb Saved Me
Sharing Recipes with MB Things I Know